There are few races that are as fun and well-organized as the Beaches Jazz run. Yes, I know I may be a bit biased because it is my home race organized by the folks that I run with every other day. But bias can only take you so far if the product doesn’t deliver. In this case, the Jazz run really did deliver.

In the past, this run was bare bones: s start and end line and some water stops were pretty much the only amenities provided. This year, the BRC (Beaches Runners Club) took over race duties and, among many things,  added chip-timing, swag bags, a LOT of sponsors, and pace bunnies!

Race day arrives and the folks were getting a bit worried about the heat and with good reason, Friday and Saturday were brutal and the weathermen called for more of the same. It turned out to be quite a lovely morning. It was a bit warm, fairly humid, but we had a light breeze that made it feel quite comfortable.

My first pacing gig B.A.(Before Adaptive) was bit of a disaster so I needed to make sure that this one goes off without a hitch. I arrived at least 15 prior to the start time, grab my 1:35 sign, head out to the start line and settle into my spot. After a few inspiring words from the BRC prez, we were off.

My plan was simple, stay as close to 4:29/km as possible and finish with a 1:34:39. In the past, I remember reading that a pacer is expected to come within a minute of the target time so I figure this was a good pace to go with.

The other pacing “rule” that I was determined not to break is to speed up or slow down close to the finish line just to make my time look good. Not only is it really poor form to do this, it is also unfair for runners who rely on a pacer to guide them especially if the pace starts out too fast because this can end the race prematurely for some.

I started out with a group of about six runners. Right next to me were two lovely young women from Lakehead University plus four other runners ran slightly behind us keeping in lock-step for at least the first six kilometers.

I am not sure what happened in the seventh kilometer that caused me to go faster than my planned pace. It occurred in the section of the race where it is completely flat and we had a fair amount of tailwind pushing us.

Regardless of reason, not soon after that, the lead woman took off (her coach’s orders apparently) while her friend fell off pace. A few of the guys stuck with me for a bit more distance but they started pulling away too.

And then there was one.

On the turnaround at Cherry, I had one runner left. As we approach the halfway point, we headed into the Spit (Tommy Thompson Park). 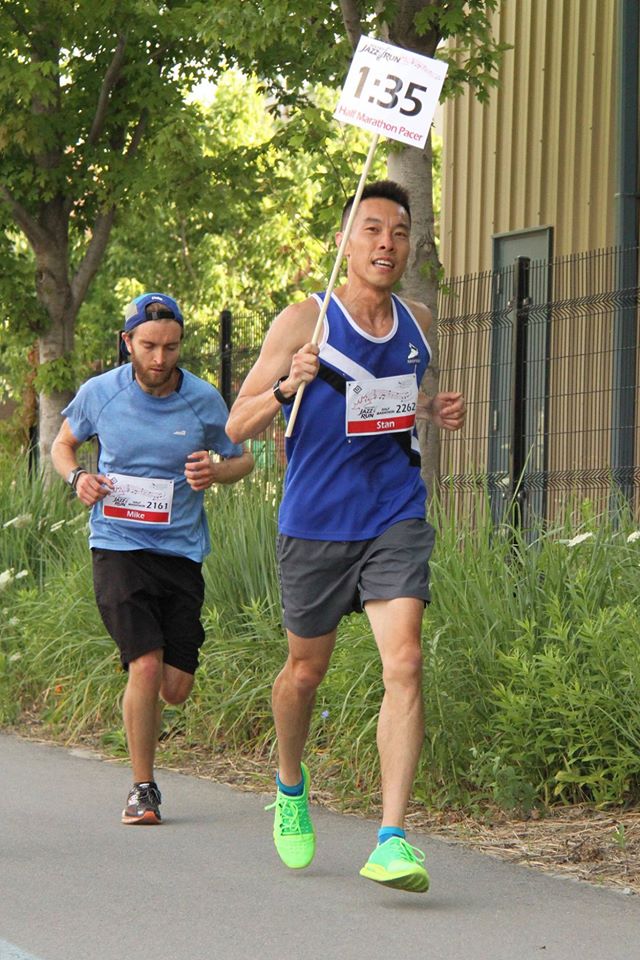 We both chatted for a few kilometers until we hit the turnaround inside of the Spit. At that point, he decided to run a bit faster and left me too.

Exiting the Spit, I work my way up to Lakeshore and spot one of the runners that started with us but went faster after the first few kilometers. He was fading fast when I caught up to him at 19K. I tried my best to pick him up and he was able to muster enough in his tank to go 1.5 km with me.

Staying true to my duties, I had no choice but to keep pace.

After passing by the Olympic pool and getting back on the boardwalk, I could sense the finish line looming ahead. I had to exert a small amount of self-control not to race it home because ,well, the finish line does that to a person.

Holding on to pace, the rows of spectators thickened and words of encouragement started flowing. The clock in front ticked the seconds off one by one as I crossed the finish line at 1:34:45 clock time.

Milling about in the finish area, I found a few of the runners in my pace group. One of the Lakehead runners ended up taking the overall women’s title while another fella took 2nd in his age group.

As for that final runner? He crossed the line at 1:35:07 and was extremely pleased with his effort.

Well, I think I managed to fulfill my task list for this race: show up on time, keep in pace, and do not speed or slow down to “pad my stats”.

Along the way, it was great to see so many volunteers from the BRC taking pictures, handing out waters, marshaling the course, and cheering people on. The course was well laid out, water and Gatorade plentiful, and a finish area stocked with plenty of nourishment.

Plus it never hurts to run next to the lake, be able to walk to Queen Street for a great brunch after the race, and hang around for some Jazz afterwards.