I am proud (and maybe a bit angry at Rachael) for finishing the Tokyo Marathon. This is her story. 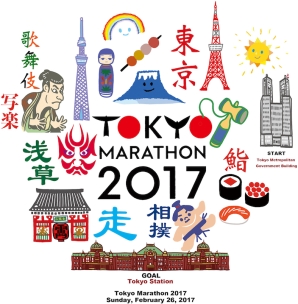 Deep in my dark pain cave

Tokyo marathon, my 4th marathon, was a complete disaster. It was by far one of the toughest mental battles I have ever had. It held to true to my belief that it is all a mind game. No matter how bad your body is feeling your brain can push it farther.

I am calling this marathon “the perfect storm”. It was the combination of a few things that sent me down a dark hole. A friend and very experienced and fast trail runner said to me “if you’re going to have a bad one, sounds like you did it the right way-light the ship on fire before it goes down” . And that I did.

Race day was beautiful and sunny. Perhaps not what I needed after a long wet and cold winter of training. The bathroom lines weren’t too long especially if you went to a “western” one. Many Japanese public toilets are holes in the ground with raised platforms for your feet. I was in the semi-elite coral right at the front. They also separated men and women in the coral and I’m still not sure why. Behind our little group of semi-elite international women were the young and fast Japanese men ready to trample us soon as the gun went off. Thankfully they let them move up about 1 min to start so they easily pushed by us before we were even moving.

I was feeling good and confident in the first few km. People were flying as it was downhill and flat for the first 10+ km. I was really trying hard no to get caught up in it, but I was still probably going slightly faster than I should have been. The course was great because it was a bunch of out and backs so you could see the elite runners on course a few times. Watching the wheel chair racers speed through the corners was amazing. I don’t know how they don’t tip over.

I was following my normal marathon eating and drinking protocol and enjoying the cheering crowds and fun costumes. Around 25k I felt like I had to go to pee. This was odd for me as I’ve never had to do that before, but I didn’t really think too much about it. It was dark, like the colour of coke and only a tiny bit. I knew right then and there what was going on. At this point any sane person would have pulled the plug and dropped out. 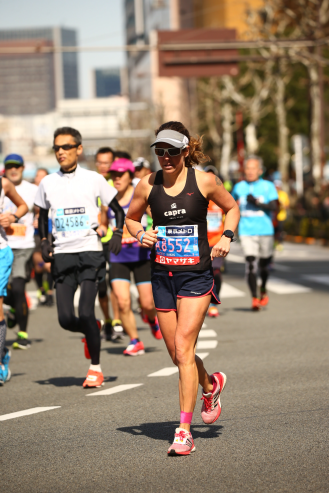 But that is not me. I decided to slow down and see what happens. Around 30k I started having stomach pain and back pain and my lower body was just shutting down. This was not like “hitting the wall”, this was something completely different. It was the first time I realized I might not make it to the finish. At this point it all became a mental game. I knew medics lined the course and I would be ok, I just needed to do everything I could to cross that finish line. I walked, I shuffled, I jogged, I cried, and somehow made it to that finish line and got my medal.

As I started the walk down the chute I decided I had had enough. I moved over to side and lay down. I really just wanted to sleep. That’s when I got put in a wheel chair and taken to the med tent. Thankfully my vitals were ok, but they wouldn’t let me leave until I had finished 3 giant bottles of electrolyte drink. The doctor really wanted me to go the hospital but I somehow talked him out of it but agreed that if I had any swelling and
didn’t pee by 9 pm I would go. That night I had to force myself to eat and drink, I wasn’t hungry or thirsty because my body had just shut down. It actually wasn’t until 4 days later and an IV at home that I actually got my appetite back. That was when I realized I was worse off than I thought.

So why did this happen? This is where the “perfect storm” comes in. I had just recovered from the flu about 4 weeks before race day. Having the flu can cause your muscles to break down and then your liver has to process the by-products. It can take weeks to recover properly from the flu. 4 weeks until a marathon is not enough (for me). Travel and time change- Tokyo is 17 hours ahead of Squamish, apparently this can really mess with your electrolytes. Next time I will give myself more time to adapt ahead of the race. Being a tourist- people do not eat and drink in public in Tokyo. I barely drank any water the two days before the race as I was concerned about respecting the Japanese culture.

This meant that I started the race in a slightly dehydrated state and did not adjust my race plan. Though to be honest I didn’t realize I was dehydrated. Also lack of sleep and over caffeination played a role. There is not one big thing that caused my rhabdo but many small ones. Many lessons learned here (that I like tomatoes in a race) and thankfully it all worked out.

Tokyo itself was an amazing experience and I highly encourage you to go if you have the
opportunity. I would do it again for sure. There is no way I would have crossed that line if it hadn’t been for my strength training and the help of Stan and Adaptive Running. He was very “adaptive” in my training with all my winter illnesses.