Boston 2018 will be a day I’ll always cherish. You can prepare to do your best in many ways- by training hard, eating and sleeping well and having the right mental attitude but one of the things you can never control is the weather! 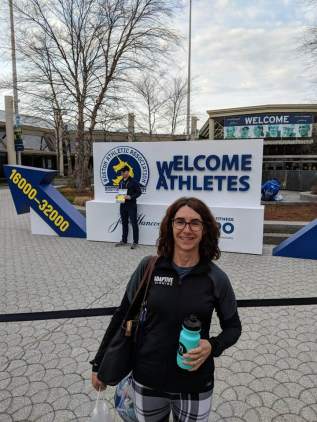 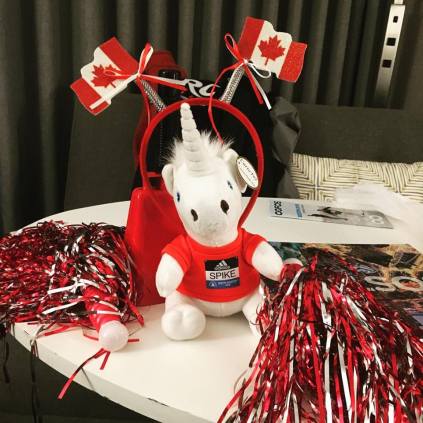 By the time I arrived in Boston Common at the buses to take us to the start line I was already drenched and cold! We lined like refugees being led onto school buses and as we pulled into the athlete’s village the roads were flooded and there was a little snow on the ground. The village itself resembled Glastonbury (haven’t been but I’ve seen photos).

It was a quagmire of mud.

Squelching along to the ports potty line my feet were numb and my teeth chattering despite an extra layer of sweatshirt, sweatpants and an old running jacket. A couple kindly gave me a garbage bag to wear and I was so grateful. We chatted for a while and then moved to the marquee to find shelter. I managed to find a place to sit and warmed a little huddled with a couple of other women also running their first Boston Marathon. We swapped stories and laughed as we changed into dry shoes which then were instantly wet as we headed like lemmings in a long line of runners to the starting line. Some distance away I might add!

Hilariously in all the excitement and shuffle of runners as we kept our heads down in the driving rain I somehow missed that I had gone over the starting line- 150 m into the race I started my watch! I had also missed my starting corral and was trapped in a group of runners going slower than the pace I wanted. Having taken my caffeine pill and Tylenol I think I was a little wired and spent a bit of time weaving through the masses and collecting a few bruises to my arms until I found a space to run which was less claustrophobic! I fought my way out of the garbage bag and pulled my sweatshirt over my head as I ran – luckily I managed not to trip! Lots of runners ran the entire race still in garbage bags.

As I ran, I appreciated being from one of the wettest and windiest spots in the UK and was able to embrace the weather. I spent my childhood walking some distance to school in similar conditions

I wasn’t quite sure what to expect from the route. I’d read about the course and checked out the 3D model in the Adidas store! It’s a net downhill but the Newton hills and Heartbreak Hill looked quite daunting on the elevation chart.

For me the race flew by. I wanted to enjoy the experience and have great memories of running this historic race, the wind and rain didn’t spoil that for me. Sporting a Canada singlet borrowed from Melanie Locke (huge thank you!), I got lots of Canada love from the crowd and chatted with a few Canadian runners and others enroute. One runner next to me laughed as she wondered how they guessed she was from Edmonton – she wasn’t in Canadian attire but then spotted my shirt.

The route is a bit of a blur, I remember seeing Santa, entering each of the villages with amazing support despite the horrible weather, I high fived lots of kids and the girls at Wellesley College. Many runners struggled, and I had such admiration for the wheelchair athletes and amputee runners, clearly in pain and shivering in the cold. If I needed motivation to keep going that was certainly it! At times the road was flooded and there were occasional high gusts of wind and rain which seemed to be horizontal. I knew the hills started at around 26k and more importantly that they finished at 32k and we would be in the home stretch.

I felt strong as I made the turn at the overpass which signals the start. Honestly the hills are not daunting. They are much easier that the hills we run In the Beaches, they are more minor hillocks with plenty of downhill in between. I remembered to keep my head up, focus on runners ahead of me and the enthusiasm of the spectators. 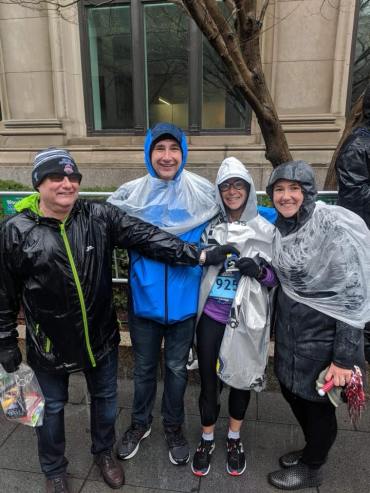 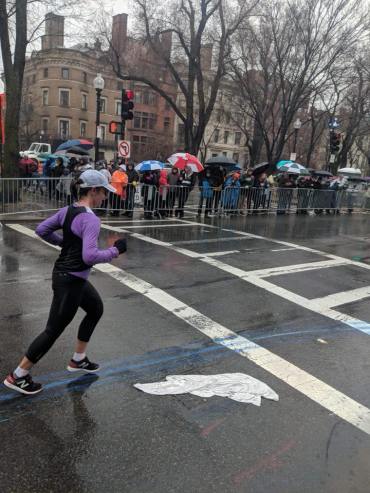 The last 10k I was fairly certain I was not going to crash and just relished the race. It’s a lot of downhill and the headwind helped in a way because I just relaxed and leaned into it. You see the Citgo sign which signals the finish line is close. Most importantly I managed to spot my family, Mei, Dan and Sam cheering as I turned into the home stretch onto Boylston. Coming over the finish line was emotional. For my own race but also in recalling others who have run before, and remembering the bomb victims and their families (seeing the makeshift memorial so close to the finish line is sobering!). 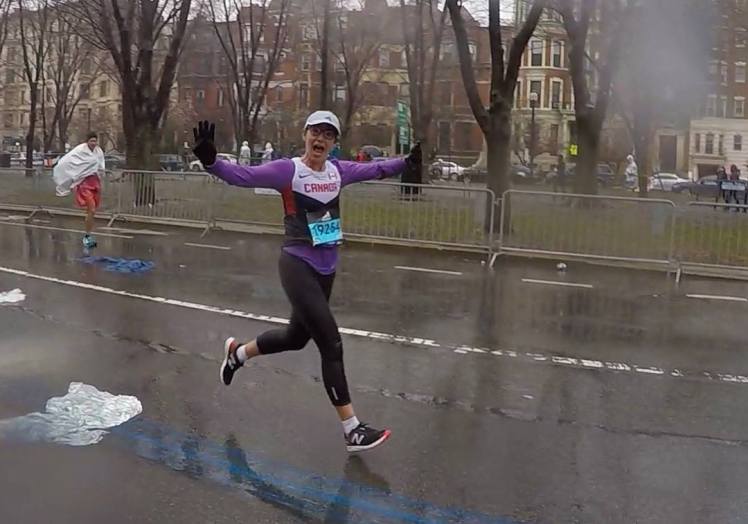 I was so elated to conquer this great race and in such adverse weather with a PB. Looking around we were all also instantly hypothermic. Thankfully the volunteers soon cocooned us in blankets which helped somewhat!

So for those of you running Mississauga in a few short weeks my advice is to believe in the training , we are well prepared on the Stan/ Larry plan. You will do awesome and I look forward to hearing others from the group with their own Boston stories in 2019! 🦄🇨🇦🏃‍♀️❤️