What the hell is this CIM you speak of?

How a runner talks to herself with 3 miles to go in a marathon!

“Last hill Jane, get to the top and down the other side and you will have 3 miles to go. Wait, am I just tired or am I actually seeing women on spin bikes up ahead? Yup, those are 20 bikes lined up..boy I would like to get on that spin bike instead of being 23 miles into this marathon.

Ok, you are done this bridge. Time to look at your watch. If you want to beat Larry, you are going to have to look at that damn watch…..4 min/km!!! yessss. You are keeping pace. I think you have Stan beat, I don’t hear him behind but Larry, remember Larry….beat Larry! Now get to the next lights and keep this pace.

This is the last 200m Jane. I think you are going to beat Larry.  Don’t let anyone pass you. 100m to go, don’t trip around the corner. You are home free but the clock is screwed up…what happened to the clock? It shows 2:49 something..I can’t see clearly…shit….what just happened?”

I then covered my face with my hands and cried. 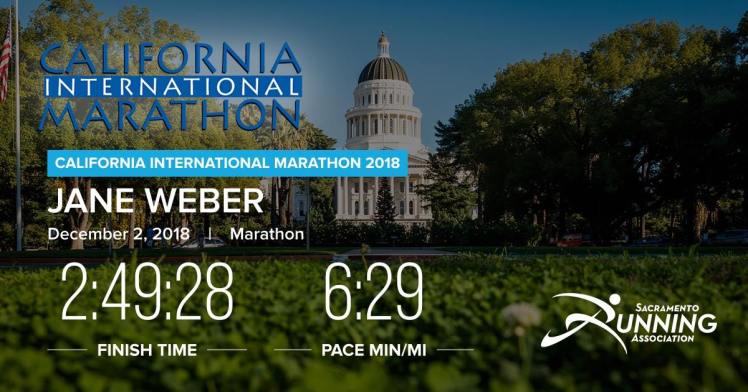 I hate writing race reports. Everyone knows that. Not only am I not a good writer (I tend to prefer knowing muscle attachments rather than grammar) but I have a hard time getting my thoughts down on paper most of the time. With that said, I get a lot of people asking about my training and since this was such a special marathon for me I figure why not write something.  I will try to keep to the meat and potatoes because really, we all read these not because we want to know what I ate in the morning, or how many times I hit the portapotty.

We want inspiration and strength for our next run, training session or injury recovery.

I picked the California International Marathon for three reasons. First, because I wanted to find a late fall marathon I could run that wouldn’t conflict with my husbands Ironman 70.3 in November.  My coach Stan Ong also said “hey, it’s flat and fast so lets run CIM”. I had no idea what CIM was but after research I realized it definitely wan’t flat but it was a very popular race in Sacramento that hosts the IAATF marathon championships.  This means lots of really FAST runners. Secondly, I also made a huge change in my professional life and moved my practice in May to One 80 Health right after the horrific Boston Marathon. I knew I needed a break physically and mentally and I also knew I needed a good 3 months to concentrate on my practice before heavy training.

My 16 week training block was rather uneventful and was able to do most of my training with coach Stan. I didn’t change much from previous sessions and my mileage was similar. If you know me, you know I run at lot. I feel I am able to do so and stay injury free because I have slowly built up the ability to sustain this over the past 7 training blocks.  My body is used to it and I tend to stay around 110-140k per week over most of the 16 weeks.  This included 2 strength training days a week.  I only ran one tune up race at the Scotiabank Half Marathon this season. I finished in 1:23:45 at the end of a 135k week. After this I had a subtle calmness and confidence going into the taper. Taper, well….taper is taper. We all hate it.

The CIM is an extremely well organized, mid size race that is point to point. Similar to Boston in topography without the Newton Hills.  It drops, and drops a lot.  Stan and I went through the course multiple times when we got to Sacramento. This was valuable as we were able to develop a strategy for the race.

We also decided to run the first half together and I would stick to his pace of a sub 2:50.  We would stick to 4 min pace for the first 10k, then run conservatively the second 10k, followed by all out racing to the finish. I knew I had a shot at beating Stan based on our training but we all know Stan is a racing machine. So tough mentally. I knew I had to gain on him because I could not out sprint him the last k.

The weather race morning was 3 degrees, no wind and absolutely perfect. This was going to be my day and I knew it. The gun went off and we went downhill, hard and fast. Then a steep uphill at 1 mile and the rolling hills for the next 21k.  6-8k in I oddly felt strange, heavy legged. It usually takes me a while to get into a race but this was different. I had a similar feeling the first 10k of the 2016 Boston Marathon, the only other time I have felt crappy early on in a race. The rolling hills were affecting me more than I thought they should. I asked Stan how he felt, “Great” he said.  I signed, shit, i didn’t feel “great” like he did.

We proceeded through 10k a little slower than expected and I really had to concentrate on what I was doing burning more mental energy than I wanted. The second 10k which they call the hilly section, still seemed hard. I wasn’t breathing heavy but my legs were a bit tired. I didn’t panic. We hit halfway in 1:25:21. I knew the second half would be rather flat with a few rollers so I didn’t have any obstacles left. This gave me a little boost in confidence.

Nutritionally, my 6 gels and hotshots were going down smoothly and I knew I would have energy. As an aside, I decided to take some good advice from Stan a year ago. I used to complain like most of us do….”ugg…gels….I can’t get them down”…blah blah, whine, whine. He finally said to me “suck it up buttercup and get them down. You need the carbs or you will bonk. What would you prefer?” Since that rather blunt and to the point discussion I take as much as I can in during the race and just forget about it. Mind over matter right? 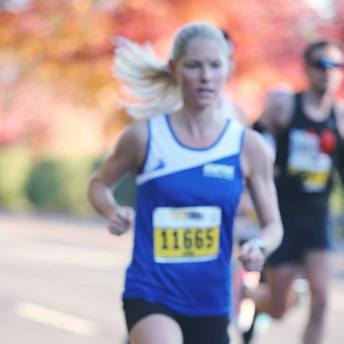 After the halfway point something odd happened.  My watch stopped beeping at every km split which I took as a sign. I needed to change things up and run by feel as still just didn’t think I was running that well. I stopped looking going forward until the last 3 miles.  I then only focused on the mile I was in, nothing ahead of me and nothing behind me.  I also worked on a new mental peripheral vision technique I read about which put me in a trance like state. This helped the km’s go by quickly.  It was at 35k where I felt I had recovered and was running a better race. I still didn’t know where I was time wise, but I subconsciously knew I must be doing well.

In the end from 30k onward I ran most of my km’s under 4 min pace.  I finished my last 10k in 39.39. It just all clicked and running by feel worked to my advantage.

I crossed the line as fresh as I ever have during a marathon. My mind was so clear those last few miles.  I kept on pushing with ease to the finish line. Of course it was hard and I had to work just like every other marathon, but this ending seemed different. I have been saying this for 2 years, all I needed was good weather and I could fly. Well to be fair coach Larry has been saying this for two years.

Another great example of this consistency is our fellow BRC member and friend Andrew McKay. I hope he doesn’t mind me calling him out, but his success the last few years has been inspiring to us all.  He had a breakthrough race in Erie this past September but it was not surprising to any of us because he has chipped away slowly. He was given a good day, great race conditions and took advantage of it.

We all must must do the work, put the time in, take care of our body, eat well and work on our physical and mental strength. Sometimes a little luck is nice too but there is no getting around the work, especially in the marathon distance that is not forgiving.